In the 1840s, settlers from Tennessee and Kentucky began arriving in the Richardson area, which was inhabited by Comanche and Caddo Indian tribes. Several of the earliest families clustered around an area later named Breckinridge. The town was situated near what is now Richland College and consisted of a general store, a blacksmith shop and the Floyd Inn. 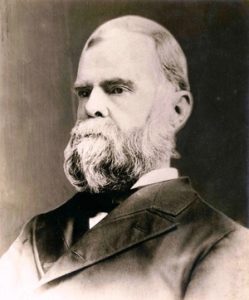 After the Civil War, the railroad bypassed Breckinridge, and an area to the northwest of Breckinridge became the new center of activity. Bernard Reilly and William J. Wheeler provided land for the town site and railroad right-of-way. The town was named for A.S. Richardson, the secretary of the Houston & Texas Central Railway.

Richardson was founded in 1873 and was generally situated between present-day Greer and Phillips streets on the north and south, and between Central Expressway and Greenville Avenue on the west and east, although a small segment did lie west of Central Expressway’s present alignment. Originally, there were three businesses: a general store, a post office and a drug store.

In 1908, the Interurban, an electric railway, began service north to Denison, south to Waco, southeast to Corsicana and west to Fort Worth. By 1910, Richardson’s population had grown in number to about 600. In 1914, a red brick schoolhouse, presently home to the administrative offices of the Richardson Independent School District, was built.

In 1924, the Red Brick Road (Greenville Avenue) was completed, bringing an increase in traffic, population and property values. The following year, the town incorporated and elected its first mayor, Thomas F. McKamy. All taxable property was assessed at a value of $515,292 and a total of 15 businesses were in operation. Bonds were issued, and in 1926, waterworks were completed so homes could be furnished with indoor water. A sewage treatment plant was then constructed, the volunteer fire department began operating and, soon after, utility franchises were awarded to Lone Star Gas and Texas Power and Light Company. 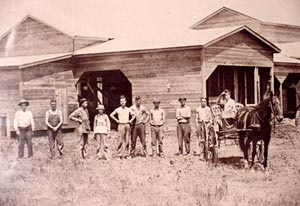 By 1940, the population stood at about 740, but after World War II, the City experienced a new surge in population. By 1950, the City boasted a population of approximately 1,300. Additional municipal services, such as emergency ambulance, police protection and parks and recreation facilities, became available to residents.

Central Expressway opened in 1954, and the agricultural city of the past became a community of shopping centers and homes. In 1955, Collins Radio purchased land for its Richardson office, ushering the City into the electronic era. Also in 1955, Richardson’s first Police Department was organized, consisting of a chief and two officers. 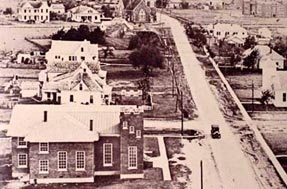 On June 26, 1956, the City Council adopted a home rule charter and the council/manager form of government that still operates today. Door-to-door mail delivery became available to the 5,000 residents, and funds were approved for a park and city hall, currently the site of the Public Safety Complex. Also in 1956, Texas Instruments opened its offices just south of the Richardson border, and land values increased dramatically as the City made significant advances in population and economic status. More than 500,000 people moved into the Dallas area in the period between 1940 and 1960.

The 1960s saw a notable increase in park land acquisition and the construction of additional facilities, especially at Huffhines Park, Prairie Creek Park and Cottonwood Park. In 1961, the Southwest Center for Advanced Studies was dedicated. In 1969, Erik Johnsson and other Texas Instruments executives donated the Center to the state and it became part of the University of Texas System called University of Texas at Dallas. During the late 1960s and early 1970s, a significant amount of acreage along the present northern city limit line west of Jupiter Road and in the northeastern or panhandle area of Richardson was annexed. In 1972, the population stood at approximately 56,000, and this same year the Richardson Independent School District (which includes some areas outside the City of Richardson) had an enrollment of approximately 32,000 students in 16 elementary schools, seven junior high schools and four high schools.

Residential growth boomed through the 1970s. Forty percent of the homes in Richardson were built between 1970 and 1979. While housing development declined during the 1980s, the City’s commercial development continued to increase. Commercial activity peaked in 1984, with commercial site plan approvals exceeding 5 million square feet. Residential and commercial development peaked in the 1980s, but both have continued to grow steadily. The 1990 Census counted the population of Richardson at 74,840, while the 2010 estimated population stood at 99,223.

Today the City is no longer the bedroom community of the ’50s and ’60s, but is itself at the heart of a significant employment center, the Telecom Corridor® area. More than 88,000 people work in the City of Richardson each day.

Richardson is one of the most conveniently located communities in the Metroplex, with access to points in all directions via both major roadways and the DART rail system.

The north and southbound Central Expressway (US 75), the main artery of the City of Dallas, transverses the City. Interstate 635, also called LBJ Freeway, is to its immediate south and the Bush Turnpike spans the northern border of the City, giving Richardson residents easy access to points east and west. Richardson hosts four DART light rail stations: at Spring Valley, Arapaho, Galatyn Park and Bush Turnpike.

Though an inner ring suburb, Richardson continues to be a vibrant community, kept current by the Richardson City Council’s emphasis on economic development and neighborhood integrity. Voter-approved bond programs in 2006 and 2010 have contributed to the maintenance and improvement of the City’s infrastructure as well as its quality of life.

The 2006 bond election brought construction of a new recreation center on the east side of the City, as well as new ballfield complexes at Huffhines and Breckinridge parks. A new fire station was reconstructed on the west side to replace an aging, outdated public service facility.

In 2010, voters approved funding for a new fire station on the east side of the City and construction of a new recreation and aquatics center on the west side and new construction of a gymnastics center centrally located on Arapaho Road, just east of Central Expressway.

But Richardson isn’t only about living and working. The City also has a statewide reputation as a great place to play, with the nationally recognized Wildflower! Arts & Music Festival held each May and the highly regarded Cottonwood Arts Festival held the first weekend of each May and October. The City of Richardson is the envy of its suburban neighbors with its state-of-the-art Eisemann Center for Performing Arts which opened to high acclaim in 2002 and continues to bring nationally recognized entertainers and shows to the area each year through its Eisemann Center Presents series while offering a first-rate facility for local arts groups and corporations.

The City of Richardson has been recognized for its economic stability and strong fiscal management by credit rating agencies, with both Standard and Poor’s and Moody’s giving the City their highest ratings.